We’re very excited to announce that we will be appearing at Camp Bestival in Dorset, August 1st. For more info and ticket details head over to www.campbestival.net

Master drum legend Billy Cobham appears at Ronnie Scott’s for a very special week residency.
With his matchless, dazzling, ambidextrous skills, Cobham has applied the same insistent fervour to his long list of monumental achievements including his classic album ‘spectrum’ and his stint in the original jazz-fusion juggernaut Mahavishnu Orchestra. He is also an accomplished composer and record producer. As one of the first percussionists ( along with Max Roach and Tony Williams) to utilize the Electronic Drum Controller made in 1968 by the Italian Meazzi Drum Company he was at the forefront of the electronic music industry and its development through Jazz. In addition, he is one of the few percussionists specializing in the jazz drum set to lead his own band. The award winning Cobham has custom-designed trend setting acoustic and electronic drum sets and has endorsed products that he created and refined.

Billy will be inviting musical guests Gregg Brown to join him on Wednesday and as a special one-off exclusive, Michael Lindup & Mark King of Level 42 fame will join him for his second show on Saturday.

This book due for release at the London Bass Guitar Show 2015 is a new, revamped edition of Level 42 – A Physical Presence Bass Transcriptions. This is a complete set of bass guitar transcriptions for the classic Level 42 live album from 1985, an important album for many bass players. Originally published in 2003, this book has been out of print for many years, but has been frequently requested by the customers.

A Physical Presence was recorded and released in 1985 and was Level 42’s first live record. Capturing the original lineup in their prime, the album showcases the unique blend of superior musicianship and songwriting talents that had proven so popular with their fans. For admirers of Mark King’s inimitable style of bass playing, the album is a treasure trove: classic instrumental pieces such as ‘Mr. Pink’ and ‘Foundation & Empire’ sit alongside pop hits such as ‘Hot Water’ and ‘The Chinese Way’, all driven by King’s energetic basslines. The book also includes detailed performance notes for each song. 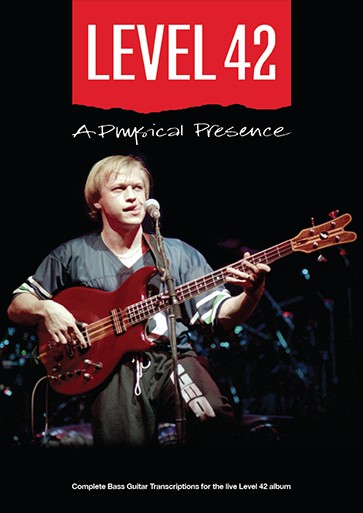 The book contains the following songs:

Priced at £22, the book will go on sale Saturday 7th March 2015 through the website and via the stand (D6) at the London Bass Guitar Show.

When a young Pete Ray Biggin (current Level 42 drummer) met Gary Husband, and was allowed to try his drums at our Level 42 soundcheck in Sheffield, 1991 Guaranteed Tour. Filmed by Mike Lindup.

Last few ‘Sirens’ 2014 Tour Programme, signed by the band! 20 pages of awesomeness just for you.

Level 42 have been confirmed for the Weyfest Music Festival September 6th, 2015.